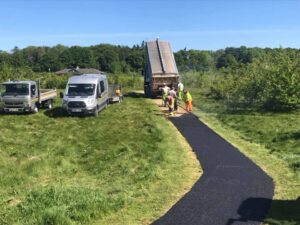 Herriard Green has been open for nearly 10 years now and has fulfilled the goal of providing a new focus for the village.

Maintaining the Sports Club and open public facilities has involved the effort and support of many villagers and organisations over the years – each contributing to keeping The Green in tip top condition for everyone. Thanks are due to all of them.

There will be need for some major renovations in the years to come. The pathways in particular have needed more maintenance than expected. We renewed the hoggin surfacing to all of them in 2015 at very substantial cost, but 5 years later, they are now worn out again.

As well as the annualised cost of maintaining the existing paths, the rough stoney surface has proved to be less than ideal particularly during wet periods. Pushing buggies, prams and wheelchairs is difficult and the uneven surface is also a barrier to use by some of our more senior walkers.

The Parish Council has been working on a path renewal scheme for some time. We decided to call it the Herriard Green – Paths for All project to reflect our desire to make The Green more accessible to all users alongside making the paths more durable.

In choosing a longer lasting, smoother surface several options were considered but tarmac was felt to offer the best solution at the best life-time cost. A number of the paths at The Green including all the entrances along with the carparks have of course been tarmaced from new.

When we introduced the plan to use tarmac, some people did raise concerns that the paths would then look less rural. This week, as the new surface has been laid, the fresh black finish does contrast with the old surfacing. However, the original black tarmac used in the other areas mentioned above mellowed and weathered quite quickly and the new paths can be expected to do the same.

Tarmacing the 1.25km of internal paths along with the Weston Road link path to Park Corner and a small extension at Hockleys Lane would not have been financially viable for Herriard Parish Council. We are hugely grateful for grant support from the range of sources listed below – each of whom placed emphasis on the aim of improving accessibility. The input of individuals and groups who wrote to us in support of the Herriard Green – Paths for All project was vital in securing this funding – thank you.

Thank you again everyone.