Herriard is home to a range of clubs and groups, a selection of these are listed below. 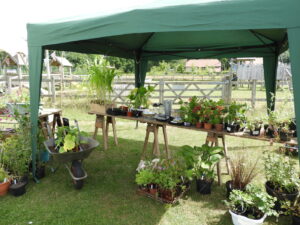 Herriard Gardening Club meet monthly at member’s houses, visiting one another’s gardens when the weather allows, sharing a love of plants and gardening. We help organise village events such as Open Gardens Day and run a plant stall at the Church Fete. We started a communal allotment at Nashes Green, building it from scratch and from where some of us grow flowers, fruit and vegetables. The Club also organises visits to NGS gardens, flowers shows and horticultural talks. We have a closed group Facebook page for club members to share photos and posts and monthly articles by HGC can be found in the Parish magazine. New members are always welcome.

Herriard Sports Club has been part of the community since 1884. After moving sites over the years, the club now has permanent roots at Herriard Green. The Owen White Pavillion was built to serve the cricket and football clubs and has excellent facilities. The Tennis Club enjoys two tennis courts at Herriard Green. All clubs welcome new members.

The Royal British Legion -Herriard, Lasham and District branch is open to anyone as well as current and retired members of the British Armed Forces, including the TA. Meetings are held quarterly in February, May, August and November and membership is £15 per year (£4 for ex-services). As well as parading at the annual Remembrance Day Service, members meet regularly at the Herriard & Lasham Royal British Legion Hall for which it is responsible.

The Herriard ex services club is open to anyone. The club bar is open Friday and Saturday 7pm-11pm and Sundays 12pm-4pm and other times by arrangement. Club events include discos, bingo, karaoke and quiz nights. A local darts and pool team meet up regularly.

The Royal British Legion Hall is available to hire for wedding receptions, functions, parties and meetings. It has a fully licensed bar, kitchen facilities, tables,chairs, sound system, disabled access, pool table and darts. The main hall has exposed beams and can seat up to 90 people. Residents can hire the hall for a reduced rate.

One of the largest gliding centres in the world. If you would like to see webcam images at Lasham Airfield visit http://www.lashamweather.co.uk/webcam.php